The Patron and the Patriot DLC

The Patron and the Patriot is a DLC pack focused on enhancing the single player campaign mode within Offworld Trading Company.

The campaign mode that shipped with the base game operates like a competitive tournament that lasts for seven games. There are nine characters to play, each with their own set of perks. While playing games, your character earns new perks through victory bonuses, events, and via accumulating income that can be spent on perks of your choice. Your strategy applies not just to each individual game, but to your character’s perk progression, which lets you tailor your strengths and weaknesses for use in later games to be played. Elimination rounds begin at game three, removing the weakest competitor from the tournament each week, until only four remain to compete in the finale, where stock buyouts eliminate the rest, leaving a sole survivor with a monopoly over all of Mars.

Upon this foundation, we have crafted enhancements designed to improve Breadth, Depth, and Immersion for campaign players who purchase The Patron and the Patriot. 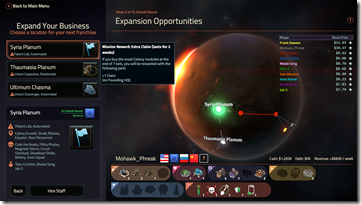 Rapid colonization of the planet opens up opportunities for colonies to specialize, creating an interdependent web of trading partners amid a more sophisticated Martian economy. Now in addition to generic Habitat and Workplace modules, many colonies have customized module types, which consume different resources than the default types (driving up prices on a different set of commodities) and even in some cases producing resources (which actually drives prices down on those commodities). Custom module types require different materials for construction, which affects games where the colony desires companies to build more domes for them.

We have added 17 classes of colonies in The Patron and the Patriot. These now provide a wide field of localized market conditions, which you as player must anticipate and manage in order to succeed. There are also gameplay tweaks associated with each colony class, including local price controls on commodities produced by the colony and special rules unique to each class that may affect cost or availability of gameplay options.

Changing the number of games played in the tournament affects perk progression. Since perks are the skeleton that gives shape to the body of a campaign, the new campaign lengths offer new opportunities for player strategy.

The shorter campaign length provides fewer opportunities to gain perks before the finale, so starting capital is increased. Players (and their AI opponents!) have the opportunity to make multiple staffing hires before the first game is played, allowing for a “jump right in” strategic experience that pays dividends quickly. With fewer elimination rounds, the number of opponents is reduced and opponents per game is reduced as well. There are fewer levels from which to choose, though, which may require you to play some more difficult scenarios.

The longer campaign length grants more opportunities for progression, but starts with a lot less cash to spend on perks and does not let you make permanent hires for the first couple of weeks. You must decide whether to spend heavily on temporary perks in the early going or try to save toward bigger purchases later. Any income earned from the early games will carry on longer, so this is no easy choice to make. Every game in the early going will pit you against three of your rivals, making for busier and more difficult games. There is more opportunity to recover from a bad game, though, and still press on toward ultimate victory. Near the end of the tournament, you must face more formidable opponents, who themselves have accumulated a high amount of perk progression and pose more threat to you.

In Colony Build mode, you know what you’re up against: need lots of Aluminum to build habitat domes and at least one construction resource for building workplace modules. In The Patron and the Patriot, colony class may affect which modules are available to construct, which can vary the resources you will need to provide. (Penal colonies, for instance, use Carbon instead of Aluminum for constructing their Prison modules.) So even for Colony Build mode, your company will need to become more versatile.

Wholesale Orders mode offers a much more dynamic challenge. The colony may request any of the commodity types. You will need to invest less cash than it takes to construct domes in Colony Build mode, but your material investments will be greater. The size of the orders grows throughout the game, requiring an ever-steeper resource cost. Some order types may be fixed, where the colony will want ever-larger orders for the same commodity. Other orders may be dynamic, where a randomly-chosen resource type will be needed for each successive order filled. Even the number of columns that will be fixed or dynamic changes from one game to the next, requiring your strategy to adapt to the individual market conditions of each game played.

Greater depth of strategy will be needed to succeed in this new, more dynamic Martian economy.

In his youth, Doctor Mikhail Nekrasov discovered transparent aluminum, the first clear metal suitable for use in construction. Today he is rich beyond measure, but Mikhail is slowly losing his battle with ALS. A crime committed against him lured him to Mars. Fate may be what keeps him there. 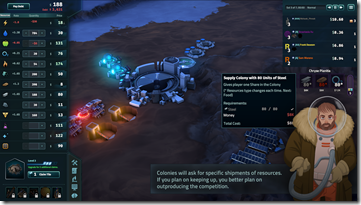 Dr. Nekrasov holds the patent for Transparent Aluminum, which permits him to substitute aluminum for glass in construction. As an indie developer, he can construct any HQ type. His company’s mining, steel-making, and geothermal capabilities are unmatched, but his specializations leave weakness in other areas.

Manuel Valencia was the brightest star in a young group of investors helping to rebuild the global economy. His firm, Icarus Investments, was responsible for establishing Santiago as the financial center of South America. A failed gamble on his biggest trade cost Icarus a quarter of its assets. Clients fled and the firm was forced to shut its doors. Seeking a fresh start, Manuel has accepted an offer from Paulo Rubini to join Seneca and come to Mars.

Manny maintains good relations with many of his former clients. Some are willing to bet on his rise from the ashes, allowing him to maintain a strong bond rating and pay only half the cost (compared to others) for financing his short term debts. Manny has set up a Core Sampling division, which provides him one Core Sample perk per level of his local Headquarters. He has no staffing specializations, instead maintaining a versatile footing, from which he relies on his Core Samples to turn the resource tide in his favor at each colony.

Six short stories have been written about life on Mars during the era of colonial expansion and economic diversification. The new colony class environment serves as the backdrop for these stories, while a fleet of colony ships sent from Earth to Mars during the optimum travel window (when the planets are near each other) explains why there will be a flurry of intense competition over the new colonies, which will culminate at a final game played at the last colony founded by the fleet.

The stories are driven in part by the player’s choices. Interactivity is indirect: you will not face forks in the road where you choose the direct outcome of a story. Instead, the subplots and details of each story will mold themselves around the games that you play: your level selections, opponents faced, staffing perks, and victory or defeat in your games. You will journey with your character through playing the games, immersing yourself in life on Mars as you apply your strategies and struggle to obtain victory. 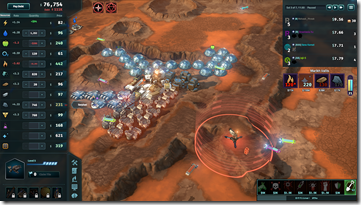 Replays of a story may yield new details not previously experienced, as different subplots or sections of background information are triggered by different player choices and game outcomes.

Bob Thomas, designer of The Patron and the Patriot, worked previously with lead designer Soren Johnson on Sid Meier’s Civilization IV and other projects. Bob specializes in matters of game balance and replayability and has a background in writing. This talent set was well matched to the task of enhancing the campaign experience for our players.